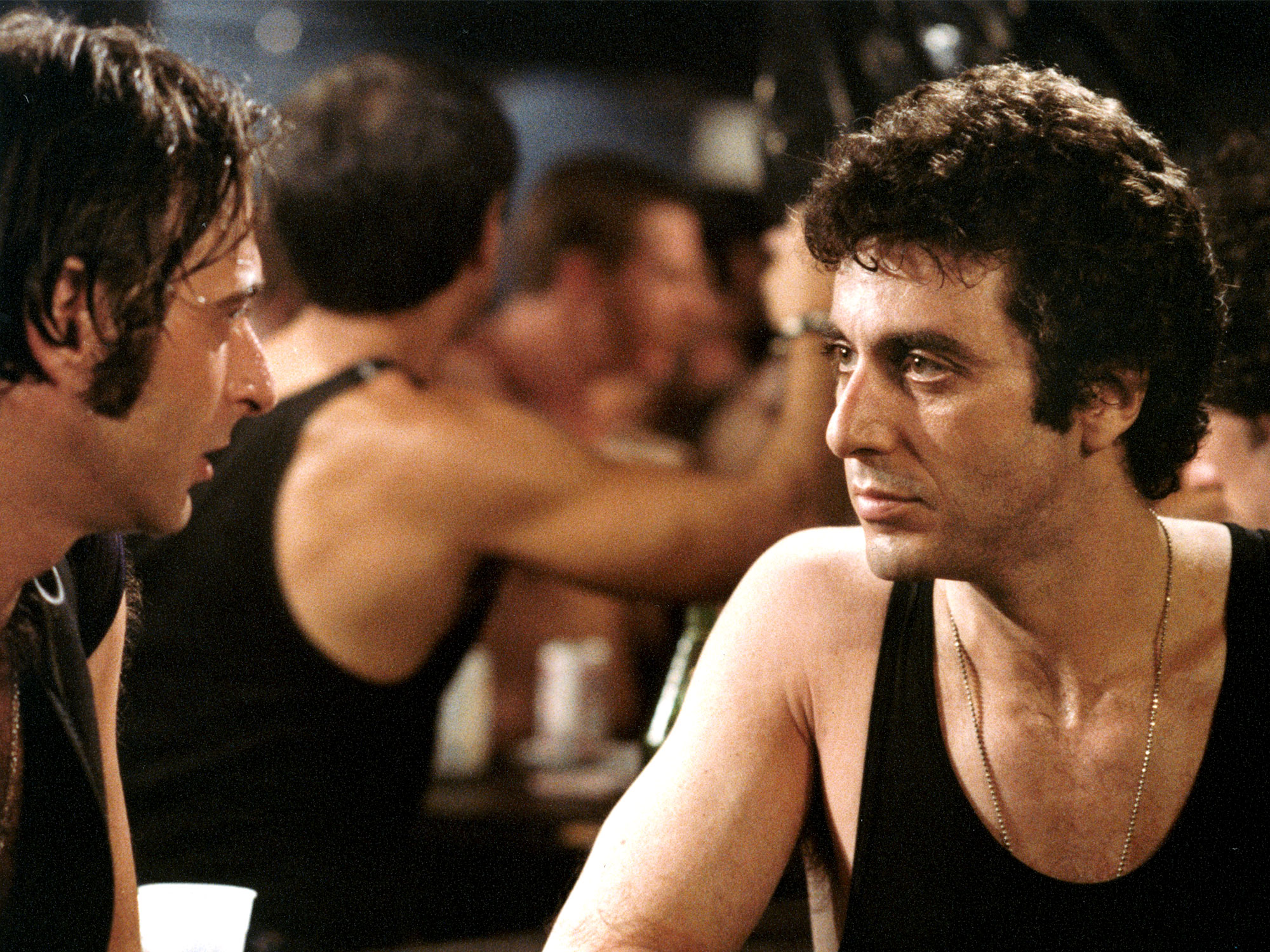 Spinell was also in the opening scene of Martin Scorsese’s Taxi Driver, and this sequence at the beginning of William Friedkin’s Cruising recalls Travis Bickle driving through a red light district and commenting that, “One day a real rain will come and wash all the scum off the streets,” or listening to a customer (played by Scorsese himself) promising to murder his own cheating wife. Bickle may seem, from the protective bubble of his cab, above and beyond the ills that he observes, but he is, without realising it, very much a part of the disease against which he sets himself up as cure. The same is true with DiSimone and Desher, who arrest a pair of transvestite hustlers only to take sexual advantage of them.

“How do you know they’re cops?”, Captain Edelson (Paul Sorvino) asks when one of the transvestites lodges a complaint. “You know how many guys I arrested last year for impersonating a cop? There’s more guys out there impersonating cops than there are actual cops.” That ambiguity cuts to the very heart of Cruising, which repeatedly crosses the thin blue line between cops and their quarry, as police officer Steve Burns (Al Pacino) is sent undercover to investigate a series of murders in New York’s leather bar scene. Indeed, it is an ambiguity enshrined in the film’s very title, given that ‘cruising’ can equally refer to a police car on patrol, or to a quest for casual gay sex.

Steve takes the assignment with ambitions to climb the greasy pole fast. But even as he dresses up in the denim, leathers, hat and coloured hanky that are the signifiers of this gay community, the bars he frequents are teeming not just with actual cops out on the pull after hours but also with civilian men who often appropriate the apparel of law enforcement (with all its fetishistic associations of dominance). In one irony-laden sequence, Steve is expelled from a club for being the only man present not dressed in a police uniform.

In films about undercover operations, it is a well-worn trope that the cop should begin to lose track of which side he is batting for. In Cruising, this trope plays out through Steve’s confusion both about his sexuality. On the one hand, he is a straight man – very much loved by his girlfriend Nancy (Karen Allen) – struggling to find his way through a queer scene. On the other, he is a deeply repressed gay man discovering for the first man who he really is. He might even, caught between desire and denial, be the killer – or at least a killer in the making – repeatedly and violently arresting the objects of his own illicit fantasies.

“You fingered him,” says Edelson when Steve objects to the terrible mistreatment suffered by one of his pickups at the hands of his police interrogators. “I fingered him,” Steve concedes, “but I didn’t think anyone was going to go that far with him.” Here there is a complete slippage between the languages of police investigation and of homoerotic activity (“We’re up to our ass in this,” Edelson later tells Steve), as procedural is sweatily eroticised and sexual transactions are reduced to masculine power play.

Here Steve’s ‘undercover’ status serves as a metaphor for his closetedness (and vice versa) – while murder is committed at the behest of an internalised paternal voice of authority that regards homosexuality as a guilt that must be bloodily expunged. Our man is murdering other gay men to kill the homosexuality within himself (of which daddy disapproved). He is a Norman Bates-esque psycho, only fixated on a disapproving, bullying father instead of mother. 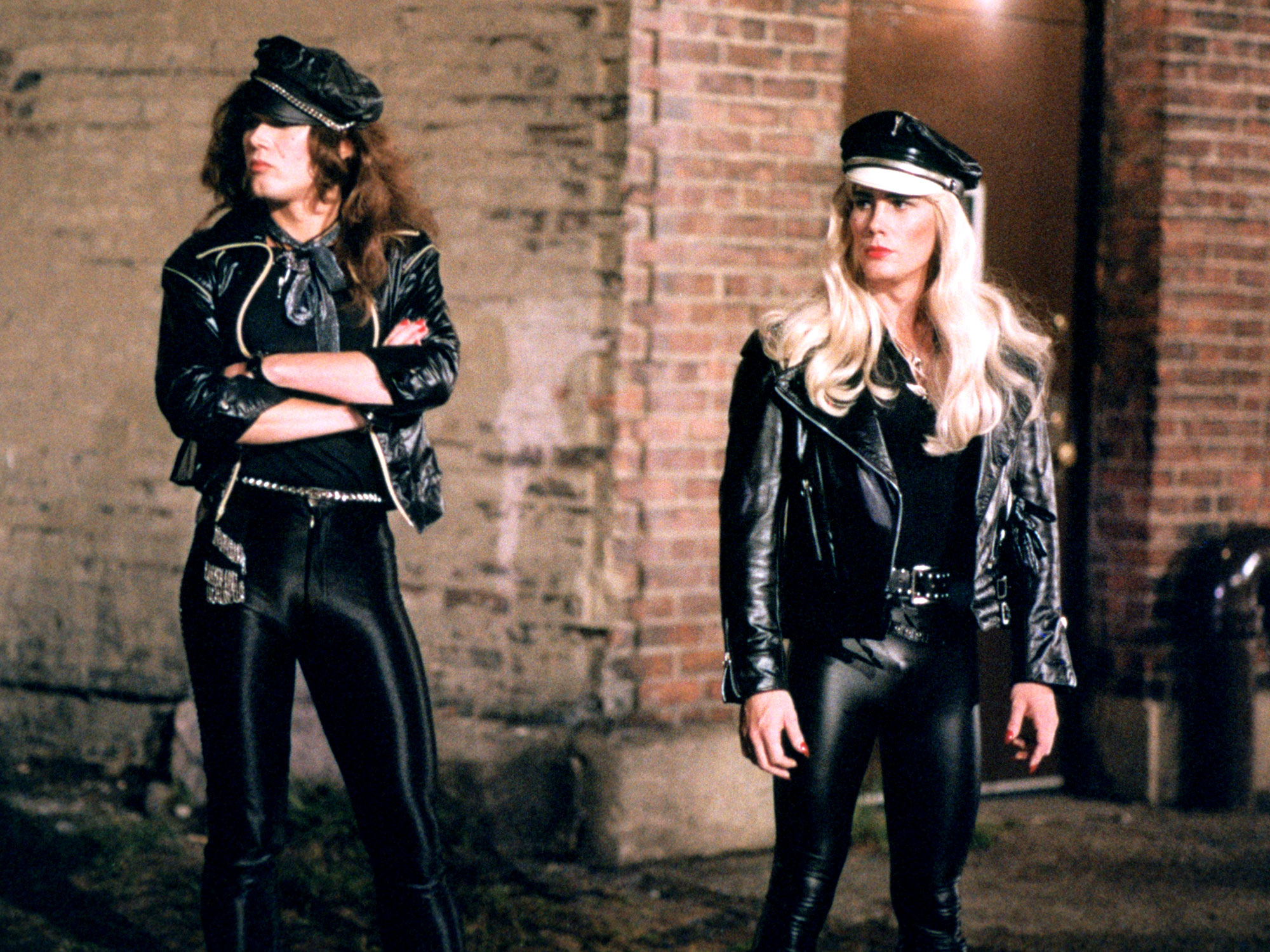 Through all this, Cruising challenges viewers – especially straight male viewers – by presenting a line-up of highly sexualised masculine beauty, and inviting us to respond either with an arousal like that of the bars’ liberated revellers, or with a disgust like that of the bigoted, sometimes conflicted cops, or even of the deranged, self-loathing murderers. Where exactly on this spectrum of responses the ever slippery Steve falls remains unclear until the end, but as he says to Nancy, “What I’m doing is affecting me,” and the suspicion remain that his walk on the wild side has changed him forever. When he tells Nancy in the final sequence, “I’m back”, we wonder what else, besides his killer costume of leathers and reflective shades, he has brought back with him, even as we last see him staring into the bathroom mirror and apparently pondering these selfsame questions of identity.

Drawing as much on recent real unsolved murders as on Gerald Walker’s 1970 novel of the same name, Cruising really is a film of intermediate states. It is not just that Steve finds himself cruising between the straight and queer, but the film’s tale of investigative infiltrations and furtive entries falls somewhere between a celebration of gay liberation and a paranoid take on internal homophobia. Friedkin himself offers up something slipping into the crack between two of his previous films: the NYPD procedural of his previous, The French Connection, and the Satanic struggles of The Exorcist, as Officer Burns and the killer try to cast out what they perceive as the devil inside them.

Most of all, the film is caught between Friedkin’s desire to cast an unwavering eye over a taboo subculture, and the censor’s reluctance to grant an R rating. This led Friedkin to visit the MPAA 50 times, and eventually to remove 40 minutes of hardcore footage from the film, cutting it up like one of this murder mystery’s victims. That footage has since gone missing from the vaults, and may well have been destroyed by United Artists, so perhaps the closest we will ever come to seeing it is the difficult-to-categorise metacinematic ‘making-of’ docudrama Interior. Leather Bar, in which Travis Mathews and James Franco reimagine what filming those sequences might have been like then and would be like now in very different times.

“Every gay group in the city is stomping around my office every day,” Everson is told by the Chief of Detectives (Allan Miler). Much the same happened to the film itself, whose location shoots were repeatedly disrupted by protesters shining lights and blowing whistles and airhorns, and whose theatrical release was met with further demonstrations. The irony is that these protests were largely prejudicial, whereas much of Brooklyn’s gay S&M community happily contributed to the film and appeared in the background of the clubbing scenes. Indeed, Cruising does not demonise homosexuality in general, or indeed the leather-clad subculture – rather it exposes the contradictions and potential dangers of any self-loathing gay man who turns his internalised homophobia violently upon himself and his own.

It is also difficult to resist reading the random murders that sweep through the gay community in the film as an allegory for the AIDS crisis, whose effects were just starting to be felt in 1980 even if the condition had not yet been named. So Cruising, all at once prescient and utterly equivocal about its central character and subject matter, ensures that viewer reactions to its provocations are complicated and uncomfortable. This is exactly what should be expected of a giallo-esque noir, although in queering the conventions of those genres, Friedkin also revitalises them.

Cruising is released on Blu-ray by Arrow Films in a brand new restoration from a 4K scan of the original camera negative supervised and approved by writer/director William Friedkin on 19 August.

The post How Cruising exposes the dangers of internalised homophobia appeared first on Little White Lies.